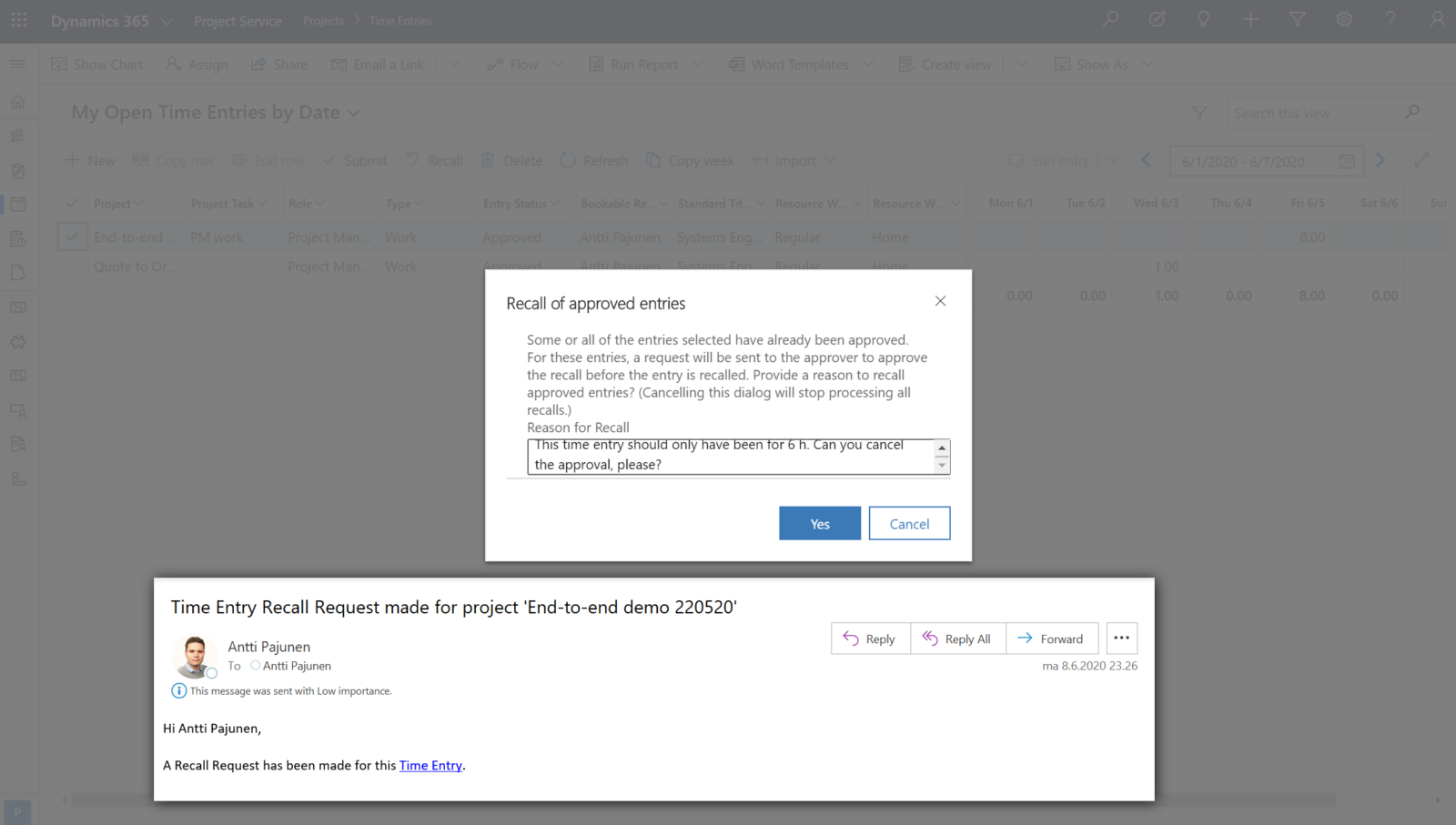 Project resources occasionally make mistakes with time entries and want to recall them. If a time entry has already been approved, a user recalling them is given an option to type a reason for their recall request. One might think a project approver will then get a notification with comments about the request. In reality, a recall request is only seen on the Recall Requests for Approval view on the Project Approval entity. If an approver wants to see the comments related to the recall request, the comments can only be found on the timeline of the original time entry.

Let’s consider the following example use case and then see what we can do to make all of this a bit easier: As a project approver I want to be timely notified of comments in time entry recall requests so that our organization can quickly move through the time entry to approval process and mitigate bottlenecks in it.

I think it’s safe to argue our example is very universal. Organizations don’t want time entry recall processes to have bottlenecks that delay the process and project invoicing. Regardless of their size, companies may have significant amounts of revenue in limbo if a recall process such as the one we’re covering on this blog post doesn’t work efficiently.

A time entry will have an entry status of Approved when a project approver rejects a recall request. The comments given for the rejection end up on the original time entry record and the idea of the following actions is to inform the original requestor of a rejected recall. You could also extend the Flow to send a notification to all project approvers of the related project.

Before a notification is sent to all project approvers on the related project, some FetchXML is needed. We need to loop through the project’s Project Team Members to list all project approvers on the related project. If anyone, despite their role, can be an approver, a simple Filter Query is enough. If you want to limit the results to approvers who have the role of Project Manager, FetchXML is needed. Again, there are several ways to approach this scenario, depending on your exact use case. The FetchXML I’ve built with FetchXML Builder is as follows:

A Filter Query for a more straightforward approach would be:

An apply to each naturally follows a list records action. From this point on the rest of the Flow is pretty straightforward. We need to get our hands on the Bookable Resource Record for the Project Team Member we’re looping through. Based on that we can get our hands on the D365 user record and then the UPN, so that we can send the project approver in question an email.

A switch is used to evaluate what the entry status of a time Entry record is. Based on a selected route, an email will be sent to all project approvers of a project. Possible values are:

When the Flow has run, a project approver will get an email that points to the Time Entry a requestor has requested a recall for.