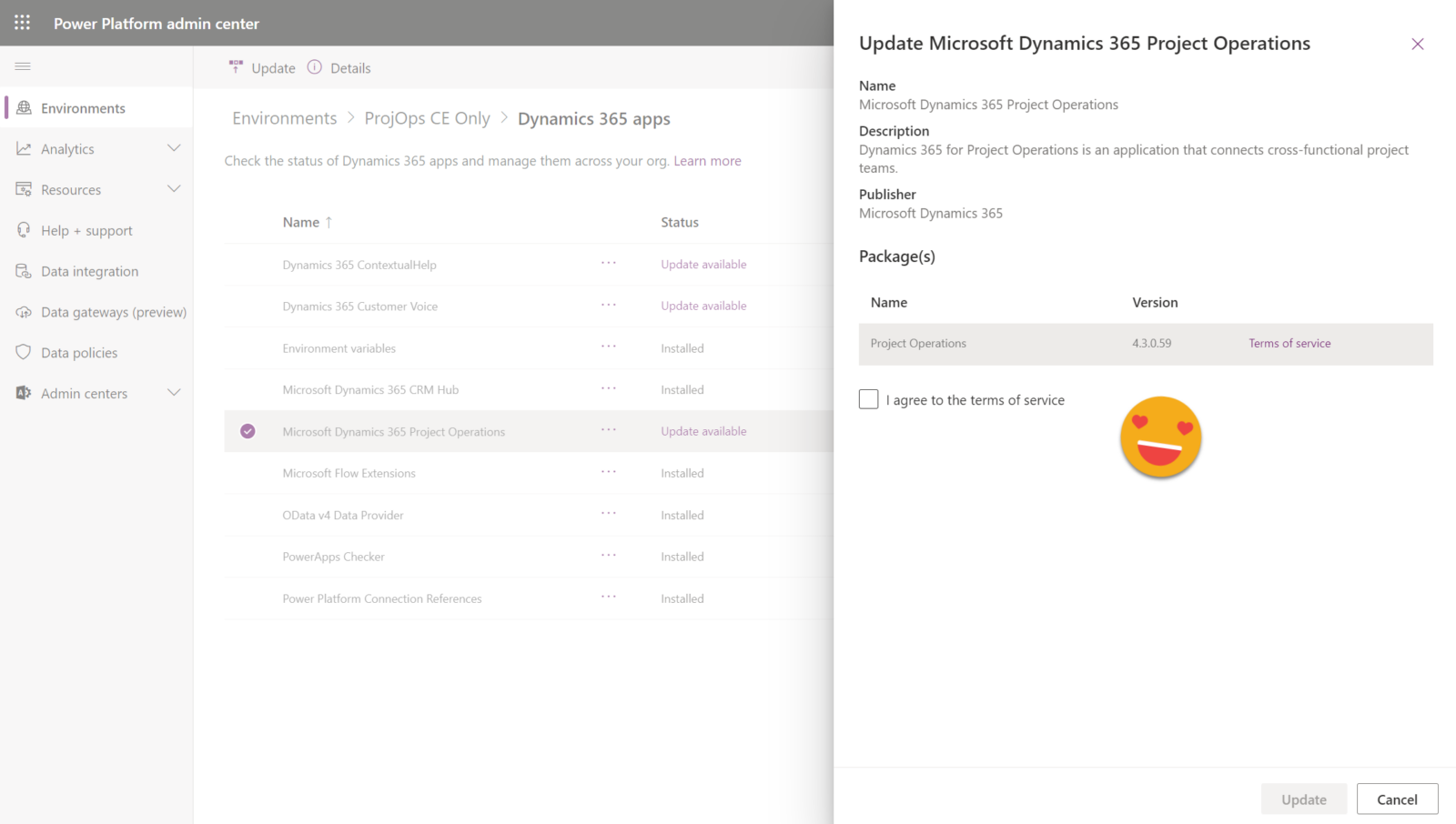 Dynamics 365 Project Operations became generally available (GA) on October 1st, 2020. With GA, many have already asked if the public preview version 4.2.0.24 (UR 2) of ProjOps can be updated to the GA version 4.3.0.59 (UR 3). This blog post will look at the CE side of things and on that side, the short answer is YES! ProjOps definitely can be updated however data upgrades are not supported. Let’s run through the update and vanilla installation scenarios for a CE only deployment.

Updating from public preview to GA

This is most likely a scenario that (hopefully) very few will have for moving to production use in ProjOps. From the very beginning, the instructions were that ProjOps should NOT be installed in a company’s production tenant, so unless you’ve been bad, this scenario should only exist when updating ProjOps in a trial tenant.

The update experience will be familiar to anyone with experience updating D365 apps in the Power Platform Admin Center (PPAC). Navigate to your environment, select resources -> Dynamics 365 apps -> select ProjOps and update -> fire off the update. The GA (UR3) version of ProjOps is 4.3.0.59 so that’s what you should see. After firing off the update, grab a coffee as the installation might around 30 minutes. Sometimes updates may take even longer so this process isn’t an exact science.

Resetting an environment and installing ProjOps

Another option to get started with ProjOps is to reset an environment containing a public preview version of ProjOps. The quickest way would be to redeploy ProjOps while resetting an environment, but as I’m writing this blog post, that option results in an error.

As ProjOps can’t at the time of writing this blog post be redeployed at environment reset, the other option we have is to perform an environment reset without redeploying any apps. This will result in a clan D365 environment with no 1st party apps installed. When your environment has been reset, simply install ProjOps by going through the step-by-step process seen in the images below.

Transitioning to ProjOps from different licenses

While I normally don’t cover licensing on my blog posts, transitioning from different licensing models to ProjOps is a question that will most likely come up very frequently. The public webinar Introducing Microsoft Dynamics 365 Project Operations (DYN871PAL) from September 28th, 2020 covers licensing in more detail. I’ve taken some bits and pieces from that webinar for this blog post.

2 thoughts on “Dynamics 365 Project Operations: Updating from public preview to GA in a CE only scenario”