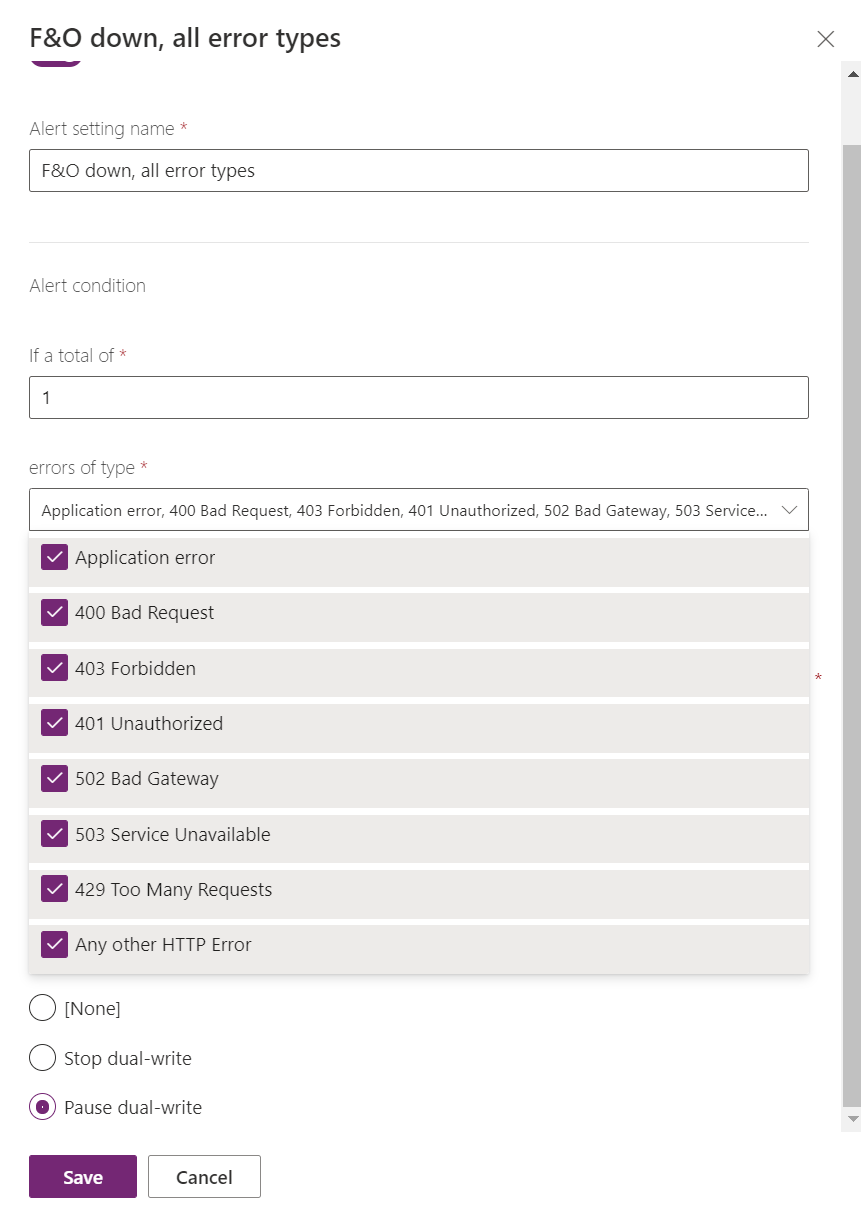 Alerts in Dual Write help admins react to planned and unplanned maintenance. During the Dynamics 365 Project Operations public preview, a common scenario is to turn off the F&O Virtual Machine while the Customer Engagement side is still up and running. With alerts, usage on the CE side doesn’t stop despite the F&O VM being stopped. Alerts go beyond sending notifications to admins about something being wrong. They can stop or pause Dual Write maps so that work can continue in the other system.

Before running through all the steps and “gotchas” for configuring alerts, I want to point out that I did run into some behavior that I would categorize as unexpected. As DW alerts are fairly new and there’s not a whole lot of documentation about the feature, it’s hard to say for sure if the behavior I’ve encountered is expected or not. As I learn more about this feature, I’ll update this blog post. Let’s now run through the alert configuration process.

Dual Write is accessed from the data management workspace in F&O. The first thing to do is to verify that all maps are stopped. If an alert is created while maps are running, the alert will not fire off when create, update or delete operations against entities related to the maps are made. When I created an alert with all ProjOps maps on, I wasn’t able to create any records in CE after stopping my VM. Whether a single map or all maps need to be stopped is still a mystery as I’m writing this blog post. I’ve experienced inconsistent behavior during my tests so I’m leaning towards recommending that all maps are stopped before an alert is created. Time and experience will tell whether this approach is overkill or not. During my tests, the Order entity in CE didn’t want to play along even though my DW alert was created after all maps were stopped. As I’m writing this post, I haven’t found a way to create Orders in CE when alerts are on and F&O is down. When I tested record creation on the Order entity, the related map Project contract headers (salesorders) did get paused correctly however saving Orders in CE wasn’t possible.

When it comes to stopping and running maps, it’s good to understand that the stop/run process takes some time. While the stopping part is fairly fast and can be done in bulk, running ProjOps related maps takes about 10 minutes as the maps have to be run in a certain order. If you’re doing a lot of testing with alerts, it’s also good to remember that stopping and starting an F&O VM takes some time. For me, stopping a VM takes approximately 5 minutes, and starting it takes somewhere between 10 to 20 minutes. This makes testing quite time-consuming.

The alert conditions depend on your use case but for quick testing, I recommend setting the alert as it’s seen in image 3 below. With an error type of Application error, the alert fires off when the F&O VM is stopped. The other error types are seen in image 4. It’s optional to send an email when an alert fires off. There are two sides to this: On the one hand, it’s helpful to get an email when an alert fires off and at least for testing, it’s very helpful. On the other hand, every time a user presses save in CE, an alert fires off and an email is sent. This happens before the related DW map gets paused. This can easily happen anywhere between 2-5 times before a map gets paused and a record save goes through in CE. To control this, it could be a good idea to instruct users to wait for a period of 1 minute before attempting to save again (if you’ve set up alerts according to image 3 below) as it takes a bit of time for DW maps to pause.

The Action on dual-write options are where things get interesting. As I’m writing this blog post I don’t have an immediate use case in mind for completely stopping DW maps. If you can come up with some, be sure to leave a comment. There is a very important difference between these two options from a record sync point of view.

When this option is selected and an alert fires off, the related DW map is paused. DW goes to async mode and new requests are queued. When the related maps are run, the records are synced from the queue to F&O. The queue worked fairly well however on few occasions records were not automatically synced to F&O when a related map was run. These records synced immediately when they were updated in CE.

After an alert has been configured, DW maps need to be run. In the Dynamics 365 Project Operations public preview, the ProjOps related maps need to be run in a specific order. This takes approximately 10 minutes and the exact instructions can be found in Microsoft’s public preview guide Project Operations: Installation Guide. Image 5 below illustrates ProjOps’ maps, excluding maps for expenses.

When the maps are running, the VM running F&O can be stopped from LCS. When the VM is stopped, it’s time to head to CE to test record creation. In my tests, I tried creating Project, Account, and Order records with Order records failing as mentioned earlier. For this example, let’s focus on the Project entity. The first time a record is saved, an error is displayed. See image 6 below for the error. As the DW alert was configured to fire off when one application error happens in one minute, it’s easy to deduce that bashing save multiple times will produce the error over and over. This will also flood your inbox with alert notifications emails if you’ve opted in to receive them. If this was a real-life business use case, users should be made aware that patience is key when this specific error comes up. It takes a minute for the maps to be stopped and the record can then be saved.

After creating a record in CE, it’s time to start the F&O VM and navigate to DW. As a Project record was created, the map related to the Project entity will be stopped as seen in image 8 below. When the map is then run, its status will display as Catching Up until all records in the async queue are processed.

When the map’s status is Running, the created record(s) can be seen in the Project management and accounting module in F&O.

What we learned in this step-by-step example was that DW alerts have some extremely important nuances that are currently not documented on docs.microsoft.com. They are: